Keep Off My Grass! 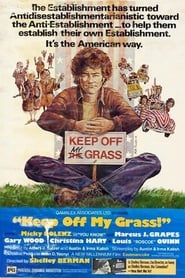 A group of merchants convinces the hippies who crowd the sidewalks of their town to start their own Utopian community in a nearby ghost town. Micky Dolenz appears as a sweet kid with a dream, tending to a single pot plant. This ill-fated comedy, which was filmed in 1971 but not released until four years later, was both the first and last directorial credit for comedian Shelley Berman. Only seen by a few in its limited theatrical run, the film has also never been released on video or DVD.

Keep Off My Grass! Vodly