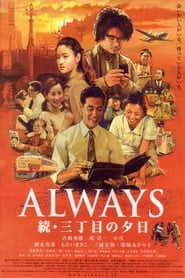 Would-be writer Ryunosuke Chagawa is still living across the street from Norifumi Suzuki and his auto repair shop, though now he shares his home with Junnosuke, an orphan he's taken under his wing at the urging of pretty Hiroi, who continues to manage a nearby tavern. Chagawa dreams of publishing a successful novel and settling down with Hiroi and Junnosuke, but his day job running the candy store keeps him busy, and Hiroi mistakes his tight schedule for a lack of interest in her. Hiroi has also embarked on a secret career as a burlesque dancer, which isn't doing much to improve her opinion of men. At the Suzuki household, seven-year-old Ippei isn't happy to be sharing the house with a guest, his distant cousin Mika who is the same age but far more demanding. Mutsuko, the apprentice female auto mechanic, is still staying with the Suzukis, and she's becomes the object of the affections of Takeo, a downbeat young man who is studying cooking.